Entrepreneurship is a global phenomenon, with socially and environmentally conscious (a.k.a. impactful) startups launching all around the world. These mission-driven for-profit businesses are solving the important problems of the world: poverty, hunger, health, unemployment, sustainability and the environment.

Not enough accelerators and funds support such startups. Those that do are most commonly organized as nonprofits and often themselves struggle with creating a viable, sustainable business model to keep their own organizations operating and growing.

In 2012 Fledge started filling this gap.  We’ve raised over $3 million and invested it into over 100 companies operating in more than 2 dozen countries on four continents.  We’ve done this iterating our model over dozens of sessions operated around the world, providing guidance, mentorship and training along with a small amount of cash, on track to prove doing good can not just benefit the world, but also earn a market-rate return for investors.

The Fledge accelerator is based on the best practices of the highly successful TechStars accelerator. In short, Fledge receives applications from around the world, accepting just 6-8 into each two month session, less than 2% of the applicant pool. Fledge makes a small investment in each fledgling, with the investment uniquely structured as revenue-based equity investment. This provides a market-rate return without waiting for or requiring a traditional “exit” by acquirer or IPO.

From 2012 through 2015 Fledge operated solely in Seattle, Washington, USA, with two sessions per year, each with 6-8 participating companies.

In 2016 Fledge began expanding through partnerships.  First was Lima, Peru with Fledge8 (the eighth-ever session), then in 2017 with Fledge10 once again in Lima and Fledge11 in Barcelona, Catalonia/Spain. These first two cities are very similar to the Seattle program, open to entrepreneurs from around the world, working in any sector, doing any impact.

In 2018 two new cities were added, and with them the first two powered by Fledge programs that are not replicas of Fledge Seattle. January 2018 the first Global Impact Accelerator Program was launched in Vancouver, BC, Canada, operated by Spring.is. This is Canada’s first accelerator tied to its Start-Up Visa program, and the only partner in that program working on impactful startups. Then June 2018 is the first ECOSTAR Nature Accelerator, operated by an EU-funded partnership between ETIFOR and the University of Padua in Padua, Veneto/Italy. This program focused on environmentally conscious startups, primarily from Europe.

Also in 2018 was the first Land Accelerator, a short-form accelerator focused on land restoration in Africa, operated in partnership with World Resources Institute.  That was repeated in 2019 and has subsequently been expanded to include programs not only Africa, but also programs focused on Latin America and South Asia.

2019 saw the launch of Start.coop, the first business accelerator for cooperative companies.  The second cohort took place mid-pandemic in 2020.

On the queue are more programs in more cities.  Some that look like Seattle and Peru, some that have a theme like The Land Accelerator, and some focused on other corners of entrepreneurship, like Start.coop.

A Network of Accelerators

Fledge’s goals in building this network of accelerators are three-fold.

First, we want to help organizations operate best-in-class programs, avoiding the common pitfalls that plague new entrepreneurship training programs.  We can help make the first session as good as the fifth.  We can save tens of thousands of dollars in legal costs getting an accelerator up and running, fill in gaps of knowledge in running an investment portfolio, and make the difficult task of raising money at least a little bit easier.

Second, every accelerator program can be improved.  We learn much faster if we’re sharing experiences.  Joining the network creates the open relationship of knowledge sharing.  Sharing not just top down from us to you.  We encourage our partner organizations to try new ideas, and share the success or failure of those ideas across the whole network.  So rather than a few learning from an annual (or bi-annual) program, being part of the network provides lessons from numerous programs per year.

Third, your graduates become part of a bigger alumni network.  This increases their exposure to mentors and investors.  This increases their odds of success.  The biggest value provided by an accelerator is the connections it makes between participants, mentors, and investors.  That is a value that increases exponentially as the network grows.  Fledge’s network lets you start with a large, global network on Day 1.

How The Accelerator Works

The modern business accelerator was invented in the “tech” sector, iterated and improved upon over the last decade by Techstars.  Since 2012, this model has proven to also work in the impact sector by Fledge, the conscious company accelerator.

[YOUR BRAND] and Fledge

Fledge [CITY] is a partnership between [YOUR BRAND] and Fledge Global. The program will operated out of [LOCATION] by a [YOUR CITY]-based team managed by [YOUR ORGANIZATION], replicating the basic structure of the Fledge accelerator, tuned to the needs of the target companies.

The program can be named Fledge [CITY|TOPIC] or it can be [YOUR BRAND], powered by Fledge. The choice is up to you, Fledge is happy either way.

An accelerator is not a difficult business to launch and operate. If it were, there would not be thousands of accelerators in the world. That said, only a handful of these programs have global recognition, and few have managed to operate ten sessions or to stay in business over half a decade. The challenges for accelerators come in having a sustainable business model for the accelerator itself, and in overcoming the inevitable hurdles of learning how to successfully operate the accelerator as a business, providing a high level of quality and service to the entrepreneurs.

Joining the network means starting with a proven business model, a proven curriculum, a large and global mentor network, access to a collection of like-minded accelerator directors, and an established brand name.

Fledge doesn’t provide everything you need to launch. You need an organization to operate the program, office space sufficient for 10-15 people to work, a local team to facilitate the program, and a set of local investors to cover the cash investments into the fledglings as well as the costs of operations.

It will also help if you have at least a few dozen volunteer mentors who can meet your fledglings face-to-face, and some local partners to help recruit local applicants.

A Partnership, not a Franchise

Joining the Fledge network means joining a global network of partners who together are building the Fledge brand. This is not a franchise agreement. Fledge Global does not envision or want dozens of copies of Fledge Seattle. The vision is instead a collection of varied accelerator programs, with the constants being a focus on mission-driven for-profits, investments into those participants, and an ethos of providing the best-possible experience to entrepreneurs.

Fledge [CITY] should be a company organized to both operate the accelerator as well as invest in the participants of that program. This can be a subsidiary of your existing organization. Funds for both of these activities come from a common pool of capital, with the operational expenses embedded within the investments.

Fledge uses a revenue-based structure for its investments. The accelerator buys shares in the company, and the company in turn uses 3%-5% of future revenues to repurchase those shares at a price which provides a [2x-3x] return on investment (inclusive of both cash and in-kind services).

This structure aligns the interests of investor and management. Both sides want to see revenue growth in the company. Both want revenues to be sufficient to be profitable. With the embedded redemption, investors get a return on investment without pushing the company to sell (or what more commonly seen in the organic and natural food market as “selling out”).

In these revenue-based investments, a small percentage of the share are no included in the revenue-based redemption. This “residual” equity is purposefully left as additional upside in case of an acquisition.

If you are interested in joining the network, we will provide you a draft financial model to help you understand the details of the capital flows, and can provide you an outline of an Executive Summary which you can fill in and share with your local investors.

A downloadable version of this overview
to share with your colleagues: 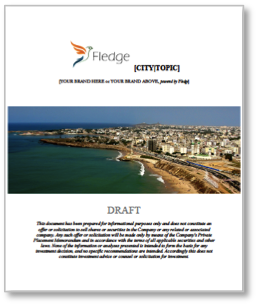