Given the variety of the fledglings, Fledge’s challenge is how to measure their collective impact.  This is a long-standing industry debate, how to measure the impact of a company in a single number, and how to aggregate that number across a portfolio of companies/organizations.

Fledge has been using the Pinchot Impact Index since its inception, in part because it was invented by Fledge’s founder, Luni, but mostly because it works, producing a value that can be tracked over time. 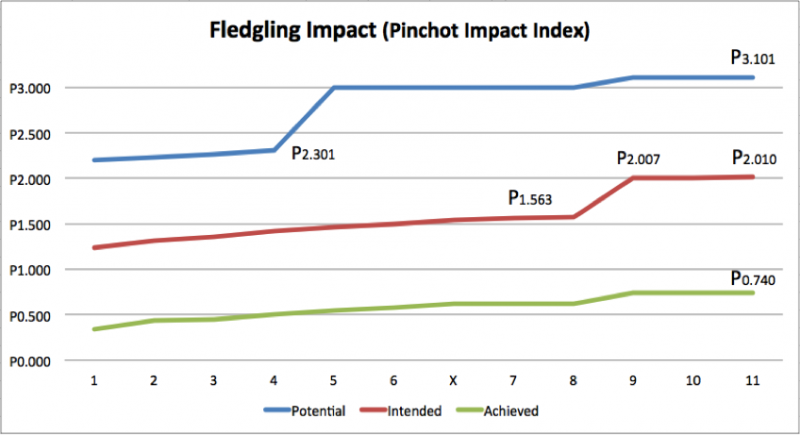 More specifically, we measure three levels of impact for our portfolio of fledglings: the potential of the idea to change the world, the intended impact of the startup itself, and the amount of impact the company has actually achieved.

All measures continue their upward climb.  All the trend lines include the loss of 13 (out of 82) fledglings, who have shut down their startups.

The high potential impact is driven by two fledglings.  Evrnu, which invented a process that makes cotton recyclable.  Zirconia, which has invented a spray-on coating that will eliminate rust from steel.  These ideas each have the potential to effect tens of billions of lives and shift trillions of dollars of infrastructure spending.

Those companies will not be alone in addressing those issues, and thus the total intended impacts are lower.  The big jump in Fledge9 is from Zirconia.

Meanwhile, most of the fledglings are still quite young, and thus the total achieved impact is still quite small.  Change takes time.

To dig into the details of the P0.740, see the list of fledglings or watch the videos.

Starting in 2017, Fledge started characterizing all of the fledglings using the UN Sustainable Development Goals (the “SDGs”). These are 17 goals, created by a committee at the United Nations to help explain what the world needs to bring the last few billions of people out of poverty. The taxonomy is quickly becoming the de facto standard for impact, including widespread use by impact investors.

Fledge has characterized all of the fledglings against the SDGs. The histogram of that effort is below. Each bar counts the number of fledglings that are targeting the specific goal. 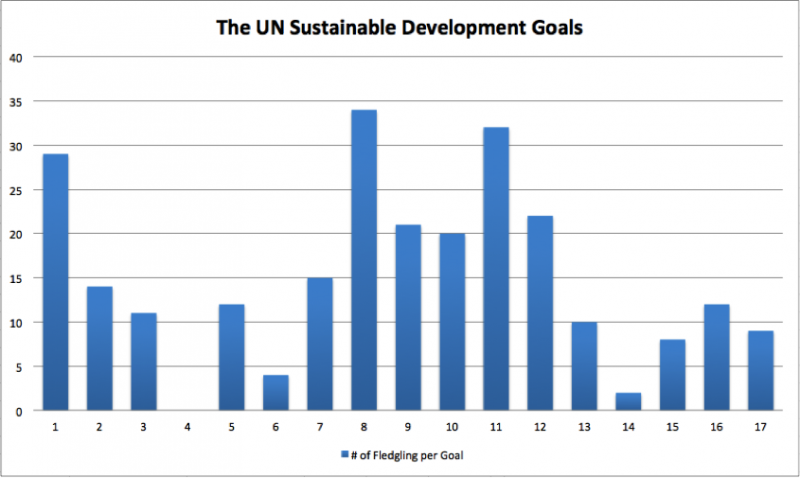 None of the fledglings are working on education, hence the gap in goal #4.

Goal #8 is Decent Work and Economic Growth, and that is not surprisingly the most common given fledglings like African Chicken, Ayni, Cropital, and Jicote, which all aim to create incomes for smallholder farmers.

Goal #11 is Sustainable Cities and Communities, and that is again not surprising as the second most popular given Arqlite, Evrnu, Zijani, and Zirconia.

We’ll see over time how this histogram changes, to see if specific goals continue to dominate, or whether the values revert toward the averages seen by investorflow.org.

Fledge selects the best companies it can find, in a process that is as gender-blind and color-blind as can be, given we interview the best applicants “face to face” over video. We do like bucking the trend in venture capital, investing in women and people of color, but neither gender nor skin color is part our selection criteria. 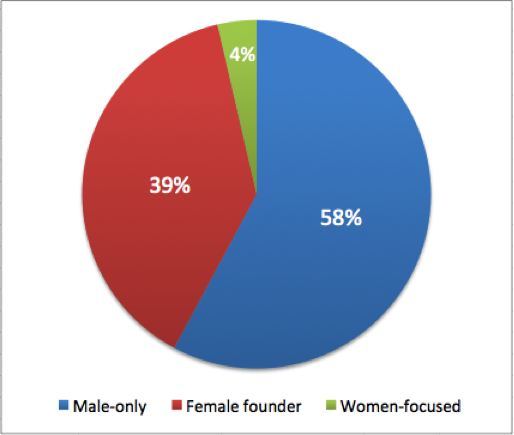 Nonetheless, 39% of the fledglings have a female founder or co-founder. Another 4% are companies founded by an all male team, but which specifically focus on employing and empowering women (e.g. African Chicken and Housekipp).

The best accelerator programs invest in their invitees, but the way accelerators invest and the mindset behind their investments is vastly different than venture capital funds and Angels, and a vastly superior process. Three key differences are: Batches Accelerators run cohorts of participants and thus choose companies in batches. Venture capital funds (and Angels, which follow the model of VCs...

A great Tweet of recent times: “This week has been the longest year of my life.” Meanwhile, at Fledge our work continues onward. We are in the middle of Fledge16 and the first-ever Angel Accelerator. Someday we’ll finish up both of those in-person. Meanwhile, as America and the world wakes up to social injustice we take a moment to look back at the faces of the dozens of...

The 2020’s are about to start, and with that, this is a good moment to look back at what has been accomplished at Fledge in its first decade of existence, the 2010s. September 2019 – Nairobi, Kenya 14 African entrepreneurs, all focused on restorative agriculture   met for an incredibly intense week of training. So useful that WRI is expanding this program beyond Africa in 2020...